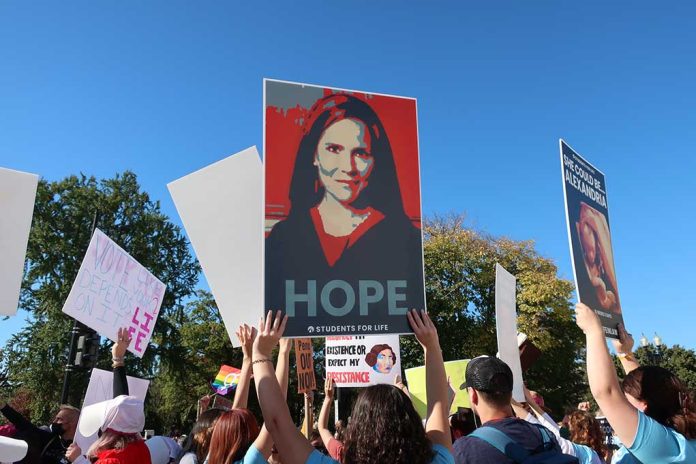 (RightWing.org) – Before former Supreme Court Justice Ruth Bader Ginsberg’s death, Chief Justice John Roberts, a supposed conservative, sided with liberals and cast the deciding vote on several cases. However, once Amy Coney Barrett joined the court in October 2020, conservative justices had a solid six to three advantage on the court and no longer needed Roberts’ vote.

Barrett has played a pivotal role in reversing earlier Court precedent that previously favored states who wanted to impose restrictions on their citizens’ religious liberties.

The Court held in Employment Division v. Smith (1990) that as long as states imposed restrictions equally on everyone, regardless of their religious beliefs, those laws would survive a constitutional challenge.

However, all that changed since Barrett began serving on the Court. Last Friday, April 9, the Supreme Court set aside the Employment Division precedent in Tandon v. Newsom. Instead, it held that a California law limiting in-home gatherings to three households due to COVID-19 violated the First Amendment’s Free Exercise Clause and kicked the case back down to the Ninth Circuit for further review.

As one might expect, Justice Roberts sided with the three liberal justices. Fortunately, with Barrett on the bench, the vote ended up 5 to 4 on the side of reason. Hopefully, this is just the first in a long line of religious freedom cases that will now have an outcome that honors the Constitution and the wisdom of the Founding Fathers.