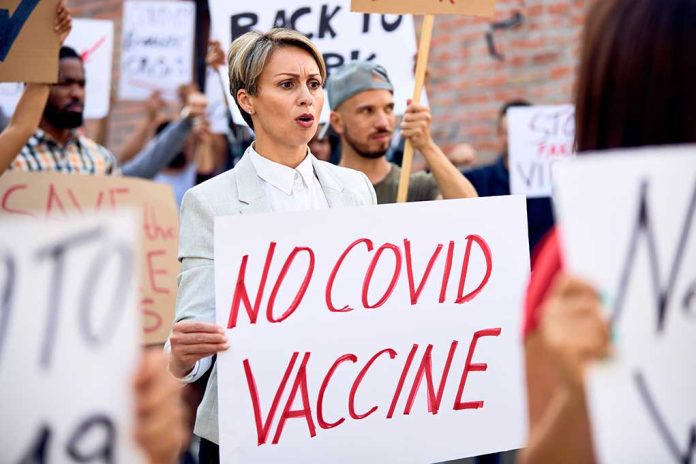 (RightWing.org) – If you’re becoming frustrated with the ever-changing landscape of government rules and regulations around COVID-19, you’re not alone. There is a lot up in the air right now, and it may not get any easier in the foreseeable future as government and public health officials use the Omicron variant to expand their power base.

In November, Biden’s Occupational Safety and Health Administration (OSHA) put its plans in place to require all workers in companies with over 100 people to be vaccinated by January 4. Weeks later, there is confusion about the mandate’s legal future, if it could expand to other business groups, and what would qualify as fully vaccinated. Stuck in the middle are businesses and employees who have put up with government ineptness due to lockdowns in 2020 and economic insecurities not resulting from the actual pandemic, but the government’s response to the pandemic.

The Whiplash Is Here

In late November, the US 5th Circuit of Appeals put a stay on OSHA’s implementation of the agency’s workplace vaccine mandate. Gravely, the court cited Constitutional questions and suggested the mandate would likely get overruled in court. By early December, all COVID cases were brought under one umbrella and given to the 6th Circuit Court of Appeals in Cincinnati, Ohio.

Are you ready for some whiplash?

On Friday, December 17, a three-judge panel of the 6th Circuit Court of Appeals lifted the stay against OSHA’s vaccine mandate. It was on, then off, now on again. The judges didn’t rely on the law or Constitution for their decision. Instead, they said protecting workers overrode the legal questions. That could be problematic for a hopeful Biden administration that could face a very different ruling at the US Supreme Court (SCOTUS.)

Business groups say they’re planning to appeal the ruling, and several states are already in the process of doing just that. The case is likely to end up in the SCOTUS. Until then, will the mandate continue to experience an on-again, off-again relationship?

OSHA Extends Timeline as Government Flips Out Over Omicron

On Saturday, OSHA issued a new regulation extending the vaccination deadline for workers. Instead of January 4, workers must now be fully vaccinated by February 9. There’s a catch and a warning — companies must move forward in good faith to meet the deadline regardless of court decisions. This government wants to ensure all workers meet the deadline if the courts uphold the order. It’s a bit of mental jujitsu designed to pressure businesses and workers to comply with government wishes. If the court rules in favor of the government, companies and states are likely to ask for an extended deadline.

That brings us to Omicron. As the fast-spreading variant makes its way around, the government is flipping out and warning that millions of unvaccinated people could die from the variant this winter. This comes despite evidence coming out of Africa that the variant may be more contagious but lacks a strong punch. At the same time, officials warn Americans to get vaccinated, but some scientists say vaccinations may not work as effectively on Omicron. How’s that for messaging?

Before this is all over, America may need to see a doctor to deal with headaches from all the whiplash. If government officials aren’t careful, they risk Americans tuning them out. That could become extremely problematic if they really need people to pay attention.

Stay tuned. This is a story that will continue to evolve.