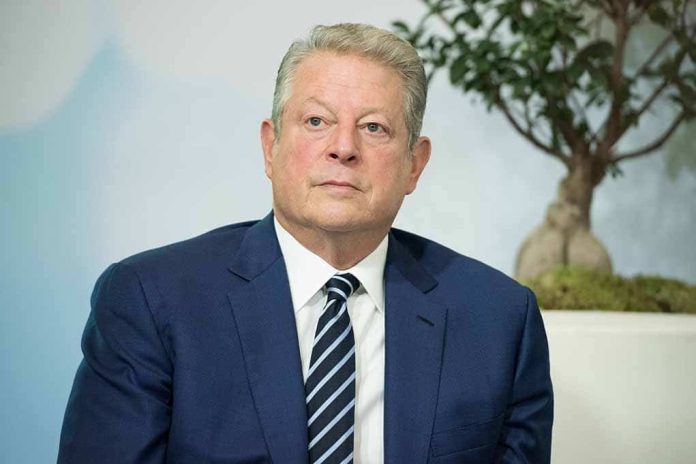 (RightWing.org) – On Wednesday, November 3, former Vice President Al Gore took time out of his busy schedule to add his two cents to the COP26 Climate Change Summit in Scotland. He gave a speech filled with the usual doom and gloom regarding the planet’s future. He also offered his solution to the problem: the creation of a global spy network to enforce climate policy and punish offenders.

Gore elaborated on his plan during a follow-up interview with MSNBC host Andrea Mitchell. He explained leading world powers could use existing satellites, air, sea, and land-based sensors, internet data streams, and artificial intelligence systems to pinpoint the origins of greenhouse gas emissions.

Continuing, Gore claimed by the end of 2022, his system could identify every plane, powerplant, refinery, ship, and waste dump contributing to climate change. Then, governments, business investors, and activists could begin “holding them responsible” for their actions.

Ironically, Gore and other members of the world’s elite contribute more than their fair share of greenhouse gas emissions with reportedly 400 private jets bringing attendees to the conference. Their jet-setting lifestyles and would end up first on the list of offenders. For example, BBC News recently reported a flight from San Francisco to London emits more than twice the CO2 emissions per person as those produced in an entire year by a typical family car.

Perhaps it’s time for Al Gore to start holding the world’s wealthy elite and their private planes, yachts, and other gas-guzzling means of transportation accountable instead of invading the privacy of everyone else on the planet.