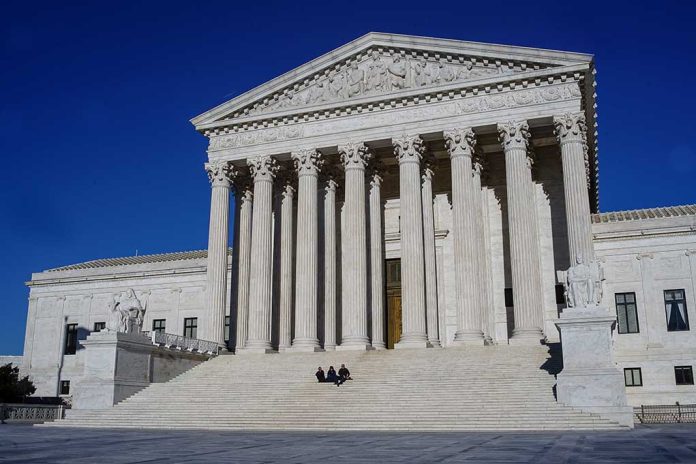 (RightWing.org) – Over the last five years, there have been several legal battles regarding who has the authority to define congressional boundaries. Every 10 years, the US Constitution requires state legislatures to draw new congressional districts based on new data from the US Census Bureau. Whichever party is in power in a given state creates the districts that most favor their odds of capturing a seat in the US House of Representatives. It’s called “gerrymandering.”

Every decade, opposition party groups file lawsuits to stop the practice. More and more, state supreme courts are overruling legislatures and taking it upon themselves to draw the lines. Still, critics argue the courts are gerrymandering without any oversight or accountability from voters and in violation of the US Constitution. The US Supreme Court (SCOTUS) will hear a case this fall on that very matter. Now, all 50 state chief justices are asking the high court to reject the claim that only state legislatures have a say in who represents constituents in Congress.

All 50 Chief Justices Push Back

In February, the North Carolina State Supreme Court tossed out a new congressional map drawn by the Republican-led legislature. The state court’s partisan composition is four Democrats and three Republicans, and it ruled the legislature created congressional districts purposely biased against Democrats. Therefore, it diluted their right to “equal voting power.” So, the court adopted a map drawn by bipartisan experts and threw out the boundaries created by the legislators.

Under North Carolina Speaker of the House Timothy Moore, Republicans sued. They argued the US Constitution exclusively authorizes lawmakers, not the courts or other entities, to draw the maps.

On Tuesday, September 6, the bipartisan Conference of Chief Justices filed an amicus brief with the SCOTUS. They said the US Constitution doesn’t prohibit state courts from intervening in the process of creating congressional maps if the legislature violates state laws or constitutions.

Republicans argue the Elections Clause in the Constitution gives state legislatures exclusive authority so long as Congress doesn’t intervene through the legislative process. The argument centers around the word “legislature.” Did the founders intend it to mean the legislative process, which is subject to a governor’s vetoes and state court rulings, or does it mean lawmakers are the sole and final authority?

Another question is: Do state Constitutions in regard to federal elections hold weight with the US Constitution, as the 50 chief justices argue? In 2015, the SCOTUS rejected a case in Arizona after the legislature sued when a ballot initiative created an independent redistricting commission. Still, the makeup of the SCOTUS was different then, and with the current 6-3 Republican majority, today’s court may rule differently.

The issue at stake is determining who is responsible, hopefully once and for all, for creating congressional maps. Is it the people’s representatives or the courts? That could determine the partisan makeup of the US House of Representatives and if it will lean to the far left, center, or right.

Depending on when the justices hear the case, they could decide the matter after the first of the year or early next summer.