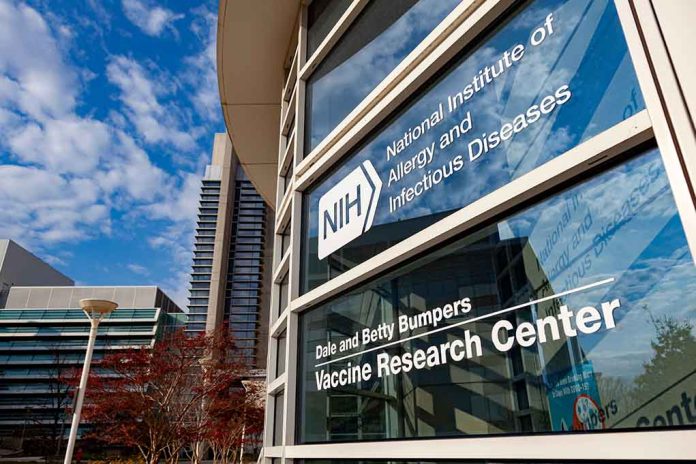 (RightWing.org) – Business owners often wheel and deal at five-star restaurants or expensive box seats at a major sporting venue. They might even purchase a bottle of wine or a gift basket for a treasured client. Yet, in most instances, the rules are different when conducting business with the federal government to prevent the potential for real or perceived corruption.

So, what about when government, taxpayer-paid scientists create a medical innovation? Who owns it, and who gets the kickback worth millions upon millions of dollars? Those are real questions being asked of the National Institutes of Health (NIH) as government scientists appear to be profiting off their government work to the tune of $350 million.

NIH Distributributes Hundreds of Millions of Dollars to Government Scientists

According to a new report by Adam Andrzejewski of Open Books, a lot of money is flowing to both the NIH and individual NIH scientists in the form of royalty payments from third parties such as pharmaceutical companies. The investigation showed that from 2010 to 2020, third party benefactors of government research paid approximately $350 million in royalties to the federal agency and its government-paid scientists.

Among the scientists to get rich off their government employment was Dr. Anthony Fauci, who heads the National Institute of Allergy and Infectious Diseases (NIAID). In 2021, he was the highest government-paid employee at $456,028. Yet, he received 23 royalty payments; the government redacted the dollar amount of the payments.

So, how do government scientists get rich off their public service?

The Epoch Times noted that when a government employee makes a scientific breakthrough, the NIH owns the rights to any patents. The government then licenses the patents for use by pharmaceutical companies to manufacture and sell the drugs. Here’s the catch… the government lists employees as patent investors. So, when third parties pay the government a royalty on the patent, the employees get part of the royalty as well.

The government says the royalty payments are part of the scientist’s salaries to hide the kickbacks.

Are the Royalties Corruption?

According to Andrzejewski, the royalty payments are a conflict of interest. He noted that NIH distributes $32 billion in grants to around 56,000 grantees every year. Over 11 years, $350 million comes back to the federal agency in the form of royalties.

On Wednesday, May 11, Rep. John Moolenar (R-MI) asked Acting NIH Director Lawrence Tabak during a House Appropriations Committee if there was a conflict of interest at the NIH and if taxpayers could trust the federal agency. Tabak admitted that the royalties did give an impression of corruption, but didn’t clearly state if it was or was not a conflict of interest.