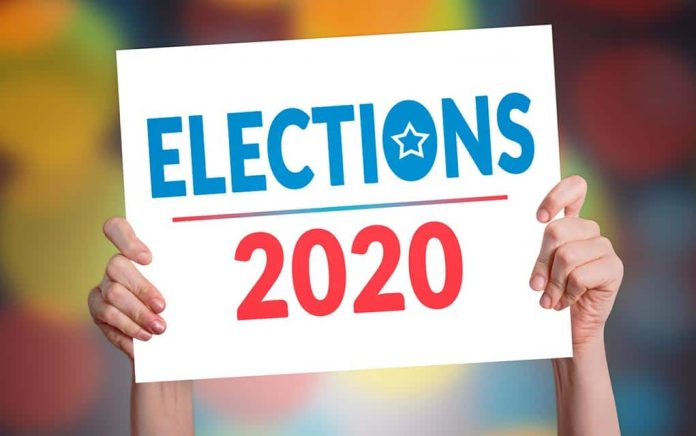 (RightWing.org) – The shape of November’s presidential election looks clear now, with seven months left in the race. Unless something goes drastically wrong between now and then, President Trump will be heading the Republican ticket again with Mike Pence as his running mate. Meanwhile, the once-huge Democrat field has now melted away, leaving just Joe Biden as the presumptive nominee.

Hawaii Congresswoman Tulsi Gabbard (D) finally wound-up her campaign on March 19 following weeks of attracting almost no support, although there’s a good chance we’ll be hearing more about the 39-year-old National Guard major in the future. That left just two candidates in the race, and with Biden almost 30% ahead in the polls, socialist relic Bernie Sanders finally bowed to the inevitable on April 8, pulling the plug in a surprise announcement to his campaign team.

Sanders will be 82 in 2024, so this probably ends his presidential hopes for good unless Biden picks him for his still-vacant VP nomination. So, barring any surprises, the presidential election will be a face-off between the increasingly gaffe-prone Creepy Joe and the incumbent, President Donald J. Trump.

(RightWing.org) – Since our last update, the field for the Democrat nomination has thinned out dramatically. No fewer than nine candidates have dropped out, leaving just three in the race.

The first to fall — and the last before the primaries began — was former Rep. John Delaney (D-MD), who quit the race on January 31; he said he was withdrawing because his polling numbers were poor and he didn’t want to drain support from other moderate candidates.

The New Hampshire primary on February 11 marked the start of the real attrition. Sen. Michael Bennet (D-CO) and entrepreneur Andrew Yang both pulled out the same day, following poor results. Former Massachusetts Governor Deval Patrick also did poorly in the primary but hung on until the next day before bowing to the inevitable.

Tom Steyer, another businessman, managed to hang on through New Hampshire and Nevada. However, when he came third in South Carolina, he suspended his campaign on February 29 after spending more than $253 million. Former South Bend, IN, Mayor Pete Buttigieg, who’d come fourth, dropped out on March 1, and Sen. Amy Klobuchar (D-MN) followed on March 2.

March 3 was Super Tuesday. When the results were in, former NYC Mayor Michael Bloomberg and Sen. Elizabeth Warren (D-MA) both got the clear message they weren’t going to win. Bloomberg wound up his campaign on March 4 and endorsed Joe Biden. Warren stuck out the speculation until March 5 before throwing in the towel.

(RightWing.org) – The race for the White House is getting serious now, and the lighter weight candidates are really starting to drop off. Since our last update three more candidates – all Democrats – have thrown in the towel.

Julian Castro suspended his campaign on January 2, then on January 6, he gave his endorsement to Elizabeth Warren. Marianne Williamson, one of the least experienced candidates, hung on until January 10 before calling it quits. Since then she’s endorsed Andrew Yang, another outsider who isn’t going to make it.

Finally, on January 13, New Jersey Senator Cory Booker announced that he’s going to run for re-election to the Senate instead of continuing his run at the presidency.

The Republican nomination is basically sealed – it’s going to be Donald Trump – but there are two other GOP candidates still in the game. Of the dozen remaining Democrats, only five or six have any realistic chance, so we can expect the rate of dropouts to pick up over the next month or so.

As election year approaches the campaign is starting to get lively. Since our last update, Republican candidate Mark Sanford has dropped out, bringing the field back down to three. There’s also been some attrition in the Democrat pack, with no less than six candidates winding up their campaigns. Four of them — Tim Ryan, Wayne Messam, Joe Sestak and Steve Bullock — were always outsiders; the surprise quitters were Kamala Harris and Beto O’Rourke, who were both favored early on but saw their poll numbers drop sharply since the debates started. With funding gaps starting to open out, and several campaigns running into trouble, expect more to drop out by the end of the year.

While the field thins, there are two new horses in the race as well, Deval Patrick and Michael Bloomberg. Check out our take on these two late-comers and what we think their chances are in the Candidate Guide below.

There have been a few developments since our last update, with two more Democrats dropping out and, once again, another Republican deciding to throw his hat in the ring.

Kirsten Gillibrand was one of the more credible Democrat candidates. A former moderate who had decided to chase left-wing votes, we’d predicted that she would be one of the top three or four Dem candidates. All we can say is “oops,” because she announced the end of her campaign on August 28th. New York mayor Bill de Blasio is also out, following consistently low poll numbers and a failure to qualify for the third round of debates.

Who looks like they’re winning the Democrat race? Until recently, former VP Joe Biden, as a moderate and safe choice, looked to be the clear winner. His lead has been ebbing away through September though, and polls from late in the month show Senator Elizabeth Warren drawing even or pulling slightly ahead.

A Quinnipiac poll released on September 25th shows Warren at 27% nationally among Democrat voters, up from 19% in August. The same poll puts Biden at just 25%, down from 32%. The race looks to have opened up again, and with it, the possibility of the Dems taking a sharp turn to the left. The big question is how well that will play with floating voters, and our guess is “Not very well.”

In contrast, the much smaller Republican field continues to grow. Former South Carolina representative and governor Mark Sanford announced his candidacy on September 8th, saying he was worried about the current handling of the nation’s finances.

Since our original post, we’ve had a couple of candidates drop out the DNC race, and surprisingly a new one on the Republican side.

On the Democrat side, Seth Moulton, Jay Inslee and John Hickenlooper have decided a successful run for the White House isn’t in the cards right now. We expect to see even more candidates come to this conclusion over the next few months as funding dries up and media attention swings to the front runners.

As for the GOP, former congressman Joe Walsh of Illinois thinks he has a shot at unseating President Trump for the nomination — time will tell. More information on him has been added below.

Elections in the US take a long time. We won’t vote for our president again until next November, but barely halfway through President Trump’s first term, the race to re-elect or replace him is already picking up steam.

Whatever you think of President Trump, he’s certainly a polarizing candidate, so this is likely to be one of the hardest fought elections in decades, and a lot of politicians see it as a chance to make a name for themselves even if they don’t have any realistic chance of winning.

Most of the next 18 months will be taken up with deciding whose names go forward for the election itself — and that’s the part of the process that’s usually the most frustrating for voters. Who do we need to pay attention to, and who can we already write off as an also-ran?

That’s why we’ve put together this guide, so you can get a glimpse into each candidate and what they say they stand for. Are there any surprises in store for 2020? Let’s have a look at the candidates who’ve declared themselves so far, and take a shot at estimating their chances.

Most analysts agree that the Democrats doomed themselves in 2016 by choosing a tired candidate that most Americans were basically fed up with. What surprised people is that the Dem race came down to a contest between the ultra-establishment Hillary Clinton and maverick leftist Bernie Sanders.

The fact that the ancient socialist made it to the final two seems to have convinced most Dems that the way to win is to go as far left as they can. That might be a good strategy for the Democrat primaries — but how will it play with the American people? No less than 25 Democrats are in the race to find out. Here they are in alphabetical order: