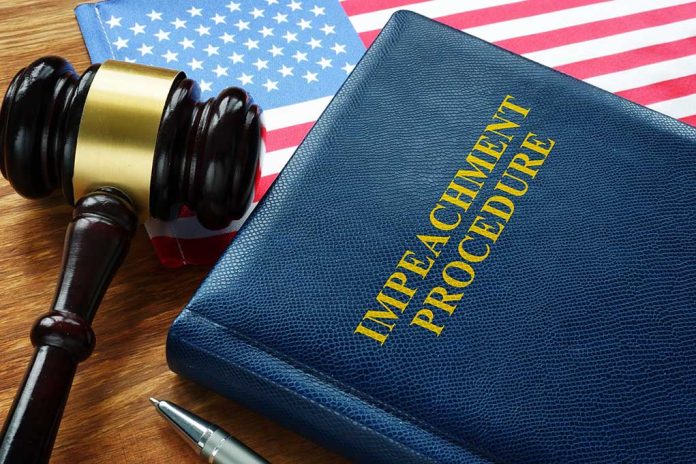 (RightWing.org) – During the 2020 presidential election, Democratic presidential candidate Joe Biden promised to reverse course on President Donald Trump’s immigration policies. He told Democratic lawmakers that if elected, America wouldn’t see the large deportations numbers seen under both Obama and Trump. Since President Joe Biden’s inauguration in January 2021, illegal immigration has grown into a massive crisis along the southern border.

Despite record numbers of illegal immigrant encounters by the US Customs and Border Patrol (CBP), Department of Homeland Security (DHS) Secretary Alejandro Mayorkas continues to insist the southern border is closed. On Tuesday, December 13, 20 lawmakers gathered to call for the secretary’s impeachment over his handling of the crisis.

On Tuesday, 20 Republican House members called for Mayorkas’ impeachment. Rep. Andy Biggs (R-AZ) said the DHS secretary committed “high crimes and misdemeanors” and insisted the lower chamber impeach him after the GOP takes the House over in January. Biggs stated Mayorkas was responsible for releasing illegal immigrants into the United States and emphasized they would “likely never be heard from again.”

In the private sector, if you don’t do your job, you get canned. So why is Mayorkas still our DHS Secretary when there were 230,678 illegal encounters at our southern border in October alone? Proud to join @RepAndyBiggsAZ in the effort to impeach Mayorkas and secure our border! pic.twitter.com/Fh1s6fBqhn

Is Impeachment in the Works?

House Republicans in the Judiciary Committee are preparing for deep investigations into the border crisis after the first of the year. Some say it could be the first step in a removal process. To impeach a federal official, the House must pass a resolution making its case for a warranted reason someone should be removed from office. It can pass with a simple majority. If it does, the Senate must conduct a trial with the chief justice of the Supreme Court (SCOTUS) presiding over the hearing.

The impeachment calls come after California Democratic Gov. Gavin Newsom warned on Monday, December 12, that Biden’s policies could “break” his state. He said immigration policy isn’t working and stated Democrats needed to take “some responsibility and ownership.” The statement surprised many, considering that California is a sanctuary state and has championed illegal immigration for years.